RHT03 is a hygrometer of MaxDetect. Today, I report how to control an RHT03 with a Raspberry Pi. It was great effort because I am a beginner.

Even its accuracy is +-2%, RHT03 is sold only for about $10 at Sengoku densyo. There are two product names (RHT03 and DHT22), but they have the same specification. To drive an RHT03, I wired it to my Raspberry Pi (RasPi) with a GPIO and check GPIO’s voltage. It was great effort because it took almost half a year to know how. Well, I have doing wood and metal works and I was away from RasPi.

First of all, I followed the instructions of RHT03 and wired like this. 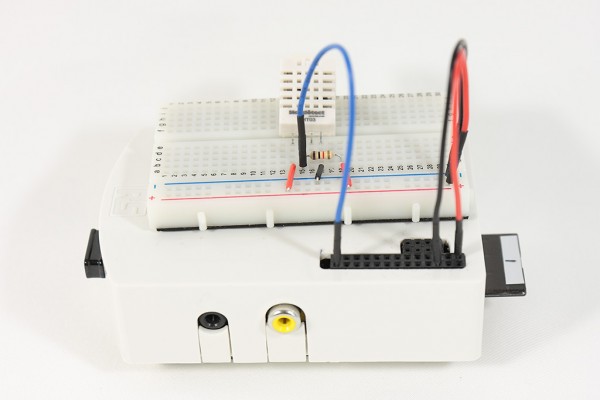 Then, I looked for sample program to make sure the RHT03 was working. The manufacture has sample program on the web, but its format is Word. 😯 Additionaly, I couldn’t understand very well. 🙁 I found WiringPi had a sample code in it. I compiled right away, but it looped unlimitedly. I opened the source code (wiringPi-da38443/examples/rht03.c) and sniffed a suspicious line.

This might mean the GPIO number I wired. I modified “0” into “7”, but the situation didn’t change. As I investigated deeply, I found the function maxDetectLowHighWait in the library (wiringPi-da38443/devLib/maxdetect.c) timed out again and again. This function measures voltage in an infinite loop, and exits when the voltage changes from LOW to HIGH. There is a 2-seconds timeout but I don’t think 2 means anything.

Finally, I decided to make program by myself. As I wrote before I program in C++. I sent a start signal and read voltage on GPIO. What I did corresponds with the following part of the manual.

This is the program. 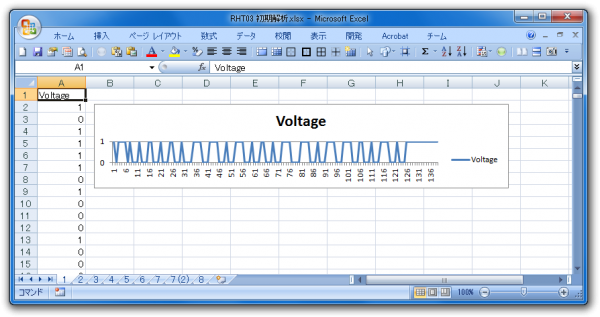 Voltage went up and down, and its width was varying. This means my RHT03 is responding 😉

I found later this was wrong.

Is there a way to measure voltage like this? We can measure voltage through GPIO, but the result is the voltage “at that moment” when I measure. I thought I needed to measure “for a certain period”. The first idea came up to my mind was using usleep().

I found right away that I failed. Raspberry Pi sleeps for 155 to 164 microseconds when usleep(1) was called. Also this program reads voltage “at that moment” and sleeps, which doesn’t mean to measure “for a certain period”.

You can use the same way to measure GPIO voltage “at a moment” and hardware clock “at a moment”. Both can be taken directly from BCM2835’s memory. For example, the address of GPIO is this.

The address of system timer is this.

There is another register called System Timer Compare, and this this sets System Timer Control/Status to 1. If you measure multiple devices at the same time, you need to use these registers, but I don’t use this time.

I couldn’t tell how to convert this into binary bits. Suppose humidity is 50% and temperature is 20 celsius degrees, the binary bits should be like this.

There are some 0s but voltage does not stay on LOW. It goes HIGH and LOW. I searched and found result measured with an oscilloscope.

I tried to calculate on Excel and got exactly 40 bits. The number also looks ok. 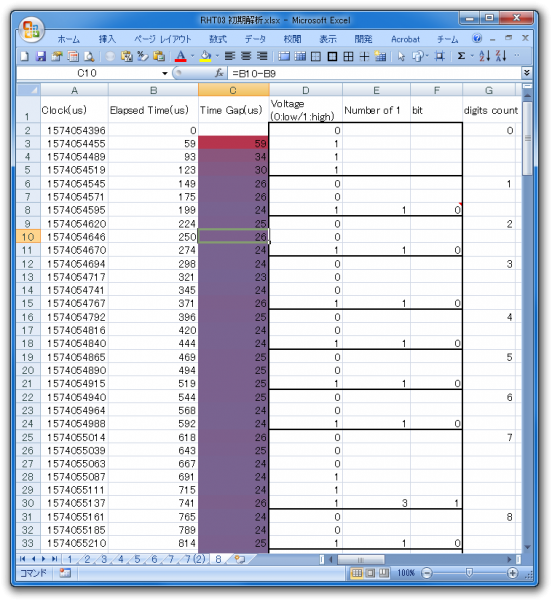 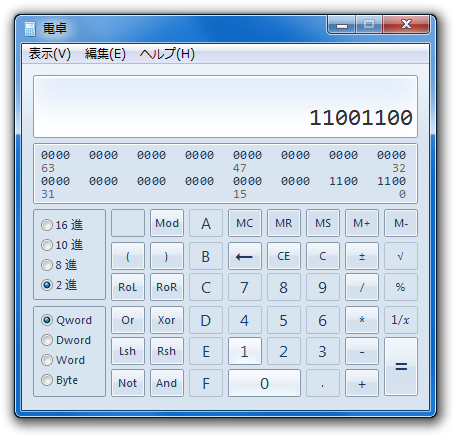 The check sum of RHT03 is for “Error detection”. Unfortunately not for “Error correction”.

I sought the error cause. This is the normal voltage transition.

There are some unusual points when I got check sum error.

Data has dropped around 3,500 microseconds. My RasPi can measure voltage 3 times a microsecond, but it took 173 microseconds only once at that moment. I guess RasPi missed the RHT03’s signal. RasPi might be “busy”. It must be a matter of task scheduling of operating system. As symptomatic treatment, I added a code to handle measuring voltage which takes more than 26 microseconds as an error.

Then I kept my RasPi and RHT03 working for one day. I set cron so that my program run every 10 minutes. I copied the result and pasted on Excel.

The result is abnormal. Humidity doesn’t exceed 100% 😉 The transaction between RasPi and RHT03 must be incorrect but the check sum happened to match. I added a code to check humidity and report an error when it exceeds 100%.

I could finally draw a graph. 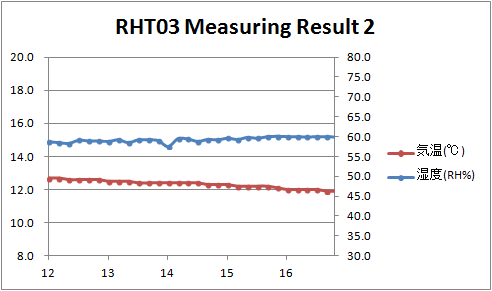 I found Raspberry Pi warmed RHT03, so I put RHT03 away. Also I added a STMicroelectronics STTS751-0WB3F and a Freescale Semiconductor MPL115A2 to work together. These are devices I have introduced a little before.

This is how the wiring looks. 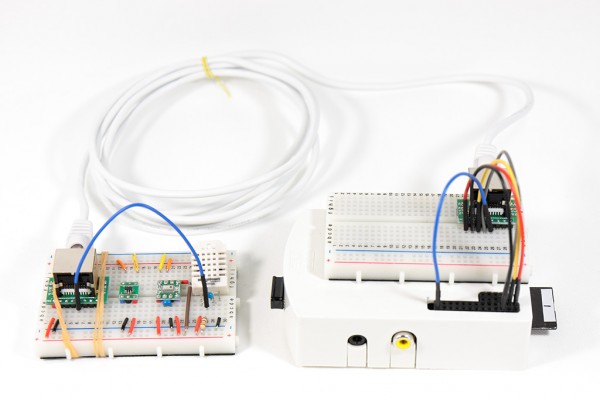 I left the breadboard on my Raspberry Pi because it is useful, so I prepared another breadboard and connected them with a LAN cable. I chose LAN cable because of these reasons.

I don’t think there are cables satisfy all of these. By the way, I’m still learning about noise, frequency and wiring. I could be wrong.

This is the side for power. 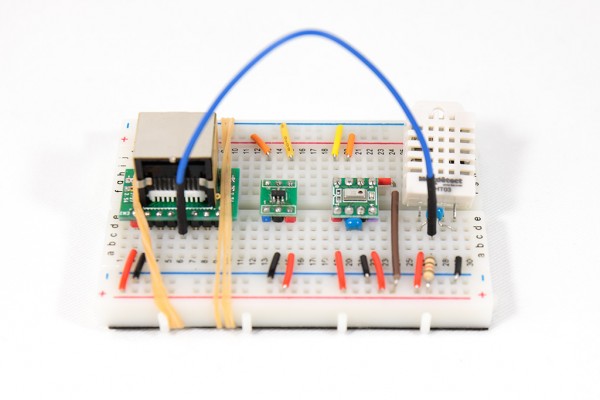 This is another side for I2C wiring. 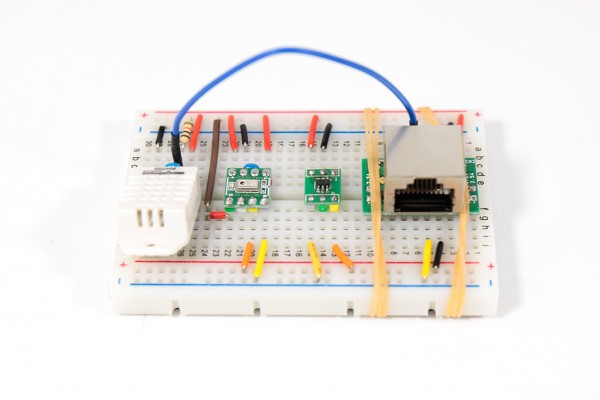 I measured all of them at once.

I judged temperature is ok because STTS751 and RHT03 have almost same value. The problem is humidity. It goes 1% or 2% higher sometimes. I overwrote how many times the program measured humidity.

I fixed the first 2 problems by improving my program. I added 500 milliseconds sleep before measuring. This might be because of the task scheduling I mentioned above.

I investigated the error causes and there are 5 causes.

There are reason-and-result combinations. I picked up all the combinations I got and put them into a truth table. 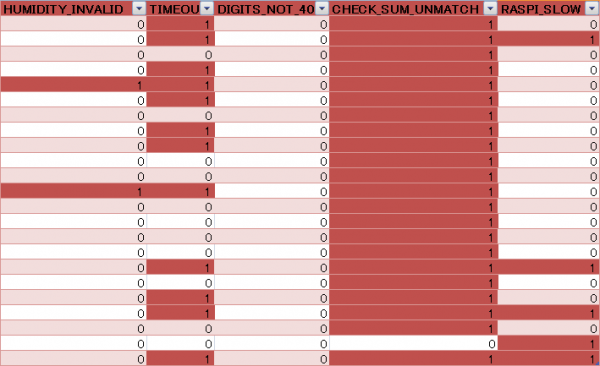 I don’t know why this happens. I’m still investigating if there is a relation, but even if I can find something, I couldn’t tell what to do because I know I can’t verify the inside of RHT03. I gave up investigating more. This could be why RHT03 has +-2% accuracy. 😉

If you want to execute the program I made, download Tango limited edition for RHT03. The program is still written in Japanese, but it should work in any languages.

If you are interested in this post, check all posts of Raspberry Pi and Electronics DIY. For example, I posted these articles.