AKB became the image character of the election of governor of Tokyo in 2012. 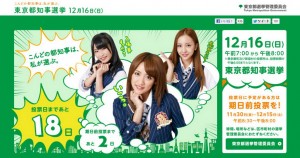 AKB is the most popular idle group in Japan, and they are loved not only by men but also by school girls on the close ages like AKB.

As their name stands for Akihabara, they started their “career” at Akihabara, the electric town of Tokyo. There were just stores of appliances and computers, but not anymore. Akihabara became the sanctuary of otaku which is a Japanese term means a person who loves idols, cartoons and comics obsessively.

As you may notice, Japanese idols make up like adults, wear extreme clothes and attract adult men sexually. They are told to do so by producers. Because this fact became a part of Japanese culture, it is hard for Japanese people to notice. I keep showing the very extreme example to my friends in the western countries. Here we go!

What do you think? They are just teens, and too sexual to me! LOL I’m glad my younger coworker had the same opinion even I didn’t say anything.

I’m pretty sure you will surprise now. This song was very successful and became one of the AKB’s best hit, and still sung in karaoke for years by generations. In the karaoke stores, kids can be exposed to this video.

I’m shocked again when I saw a TV advertisement of a gum. Just look.

This is too much!

When AKB was established, their major audiences were otakus of Akihabara. AKB has a theater and sings every day. They also sell CDs, photos and lots of stuff. I don’t know very well. The most unique “business” they started first in Japan was to combine a CD with a voting paper to vote for the best one. The more you buy CDs, the more you can vote. Then the girl who voted can expose herself to the public more. This system let otakus become crazy and they can sell CDs more than their popularity.

Even after they became the top idles in Japan, they keep selling CDs with voting paper once a year. They call this an “election”, and it was broadcasted on TV real time like real elections.

AKB changed a scandal into a chance, which I’m very impressed. Rino Sashihara won the 4th place in the last election, but one magazine exposed her picture with her “friend” a few days later. There are some rules to be in AKB. They can’t have a boy friend. It is also a taboo of idols in Japan. If they break this rule, they have to quit. The producer, Akimoto, decided to “exile” her to HKT which is a brunch of AKB in Hakata, the west part of Japan. HKT has no popularity. Most of Japanese people recognize AKB, but not HKT. Can you imagine what happened next?

Rino got a chance to apologize and even got encouragement, and Akimoto had an official reason to use her in HKT! I think he pretended very sad and angry, but actually he was lucky. By the way, just before the scandal, she released her first CD, “But I still love you”. LOL

Japanese idol girls have to be multi-talented. In the 70s, they were just required to be “a flower on the cliff”. Now they have to do anything. They even have to make the audience laugh like comediennes! This is very important to success in Japan. They have to say something funny, humorous and witty. AKB is doing pretty well. They talk very well in the TV show. Sometimes they are better than comedians.

This phenomenon is taking comedians’ job away. Comedians are required to do more extreme things. This year, Sugi Chan became the largest hit, but he got injured seriously in a TV shooting. He jumped into a pool from 10 meters above, and broke his bones. It took 3 months to recover.

By the way, AKB has good songs too.

This is the song that pushed AKB to stardom. They wear military suits, but I don’t think this is metaphor for recent Japanese public opinion because this video was taken before the island disputes. They use river as difficulty of life and encourage to go across it in the exaggerated way.

I like this song too. They encourage people who graduate from the school. I don’t knwo what “five” means though.